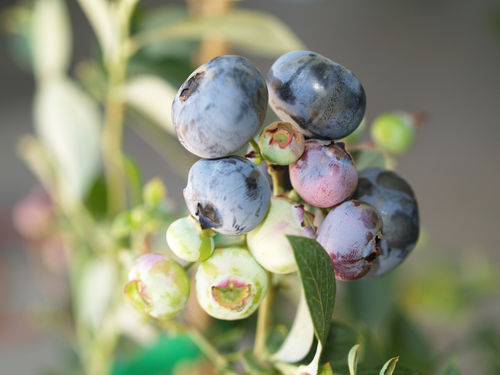 The Blueberry plant is a free standing, thornless bush that does not require staking.  Depending on variety, the plants grow to  around 1 to 2  m tall and 1 m wide when mature.   Blueberries belong to the Ericaceae family and are  related to Azaleas and Rhododendrons. If grown on the right soil, blueberries are a relatively easy crop to grow.  They have very few pests and diseases and are an excellent plant for organic farms and home gardens.  Blueberries are presently experiencing high popularity and consumer demand because of the recognized health benefits due to the high concentration of antioxidants contained in their pigmented fruit.

Blueberries thrive in pots and are can be kept on balconies and in courtyards etc…..for the home gardener it is often easier to grow blueberries in pots than in the ground.

Blueberries prefer a deep, well-drained fertile soil, high in organic matter.   Like azaleas they are adapted to acidic soils and for optimal growth require a pH around 4.5–5.5 when they are planted in the ground.   Adding elemental sulfur or peat moss is the most effective and quickest way of lowing the pH of the soil. Alternatively, the addition of compost, manure or pine needles will slowly reduce the pH of the soil over time.   Plants growing in poorly drained or alkaline soils will struggle and not be productive. Shallow or poor draining soils can be improved by creating a raised bed to  assist with drainage.

For the home gardener growing blueberries in pots can be preferable to growing the plants in the ground. Blueberries absolutely thrive in pots and are very productive as long as they are watered frequently and grown in a well drained fertile potting mix.  If grown in pots with a pinebark based potting mix and controlled release fertilizer the pH is not so critical and a range from pH 6-7 is suitable.  It is best to use a premium potting mix that that meets the Australian standards.  Fertiliser in the form of slow release prills or organic pellets etc are required to supply the plants nutrient requirements.

Blueberry plants have a shallow fibrous root system and require  regular irrigation throughout the growing season.  They are not drought tolerant and will become unproductive if they are allowed to dry out. During the growing season and especially while they are fruiting, irrigation, several times a week is needed.  In general 2 to 3 megalitres per hectare are required for commercial blueberry production.  Mulching the plants with manure, compost or other organic mater will help conservative soil moisture and reduce weed competition. As the mulch breaks down over time it adds organic matter to the soil which helps maintain the acid soil conditions that blueberries require.  For optimal pot production the plants must be keep moist and generally require watering every few days.

North to north-easterly aspect is preferable to give maximum sunshine hours and the earliest production. Whilst other aspects can be used you will find south-facing slopes will be cooler and hence produce a later crop.  In pots it is best to keep the plants in a sunny position but they will tolerate dappled shade.  In the ground, plant spacing will vary depending on variety. Generally Southern Highbush plants are  spaced at 0.8 m to 1 m apart within rows with the rows being 3 m apart (3700–3300 plants/ha). Rabbiteye varieties, due to their greater vigour, are planted at 1.2 m to 1.4 m spacings within rows (2500–2100 plants/ha).  Running rows in a  north – south direction will maximise light inception.

Flowers are generally produced on the previous seasons canes which form flower-bearing lateral branches in their second spring growing season.  After  three years these woody canes become less productive and should be  pruned at ground level.   Prune the plant after harvesting has finished (late summer /autumn), keeping only the strong, vigorous  canes and laterals, especially the ones shooting from the base  of the plant.  Open out the centre of the plant, and remove any weak twiggy growth.  The plant will respond to a hard cut back  and produce new vegetative growth and a bigger crop the flowing season. Blueberries are long-lived plants and will bear fruit for over half a century.

The flowers are attractive bees and other insects which are important for pollination and subsequent  fruit set.  In general, most  blueberries will produce fruit as a single variety but if possible it is best to plant two or more  varieties to improve fruit set and extend the harvest window.  Commercial plantings usually consist of alternate rows of two varieties that flower at the same time. Some plantings may have two rows of one variety followed by a single row of the other variety.

The average mature blueberry bush should produce 4to 5kg or more of berries each season. The fruit grows in clusters of berries which do not ripen evenly. The fruit in any single bunch will ripen progressively, over a period of 5 or 6 weeks. Under-ripe fruit are usually a bit tart, so for maximum sweetness leave the berries on the bush for as long as possible. Wait for a week or so after final coloring has been reached, then pick the best and darkest from each cluster.  Being able to pick  blueberries when they are are at there optimal ripeness for your taste is one of the great benefits of growing your own.  Most commercially produced blueberries are picked early to minimize damage during handling and transport and to maximize storage times but this is often at the expense of flavor and quality.