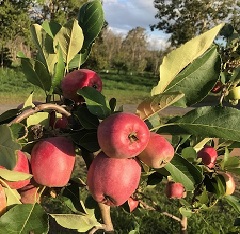 Low chill, sub-tropical apples are suited to tropical, sub-tropical, and warm temperate climates that have mild winters (100 to 300 chill hours). They are the best choice for warmer parts of QLD, NSW and will fruit well from Sydney to Cairns.  These varieties will also grow well in colder climates but late spring frosts may damage the flowers and affect fruit set. Sub-tropical apples produces delicious, crunchy apples very similar to their cold climate cousins.

For the home garden, apples a best grafted onto dwarfing rootstock. They will grow to less than half the size of a regular tree but produce fruit that is the same size and quality.

Pruning, spraying and harvesting is much easier to manage with dwarf apple trees and they often come into regular bearing earlier than the standard counterpart.  Initially they grow at much the same rate but once the dwarf trees reach around 1.5m they begin to slow down and settle into maturity. Dwarf apple trees can be kept at height of 2 to 3m.

Dwarf apples are ideal for the small garden allowing mixed varieties to be planted in a confined area.  They are also ideally suited as pot specimens.

Being self-fertile Anna does not require a pollinator and a single tree will produce abundant fruit on its own. It can, however, be used to cross-pollinate Dorsett Golden and Tropic Sweet

Anna trees are very precocious and usually start to bear fruit in their 1st or 2nd year.

Dorsett Golden originated as a chance seedling discovered by Mrs Dorsett in the Bahamas in the 1950’s. It is believed to have Golden Delicious in its parentage and it produces similar large yellow fruit with a sweet firm white flesh.

It is not self-fertile and will need to be planted with either Anna or Tropic Sweet to produce fruit.

Like Anna, the trees are very precocious and usually start to bear fruit in their 1st or 2nd year.

Tropic Sweet is a large red apple similar to the Jonathon apple in looks and flavour. Sweet and Juicy with a crisp white flesh. It is the earliest fruiting of the sub-Tropical Apple varieties and is usually ready to harvest two weeks before Anna.

It is not self-fertile and will need to be planted with either Anna or Dorsett Golden to produce fruit.

Like Anna, the trees are very precocious and usually start to bear in their 1st or 2nd year.