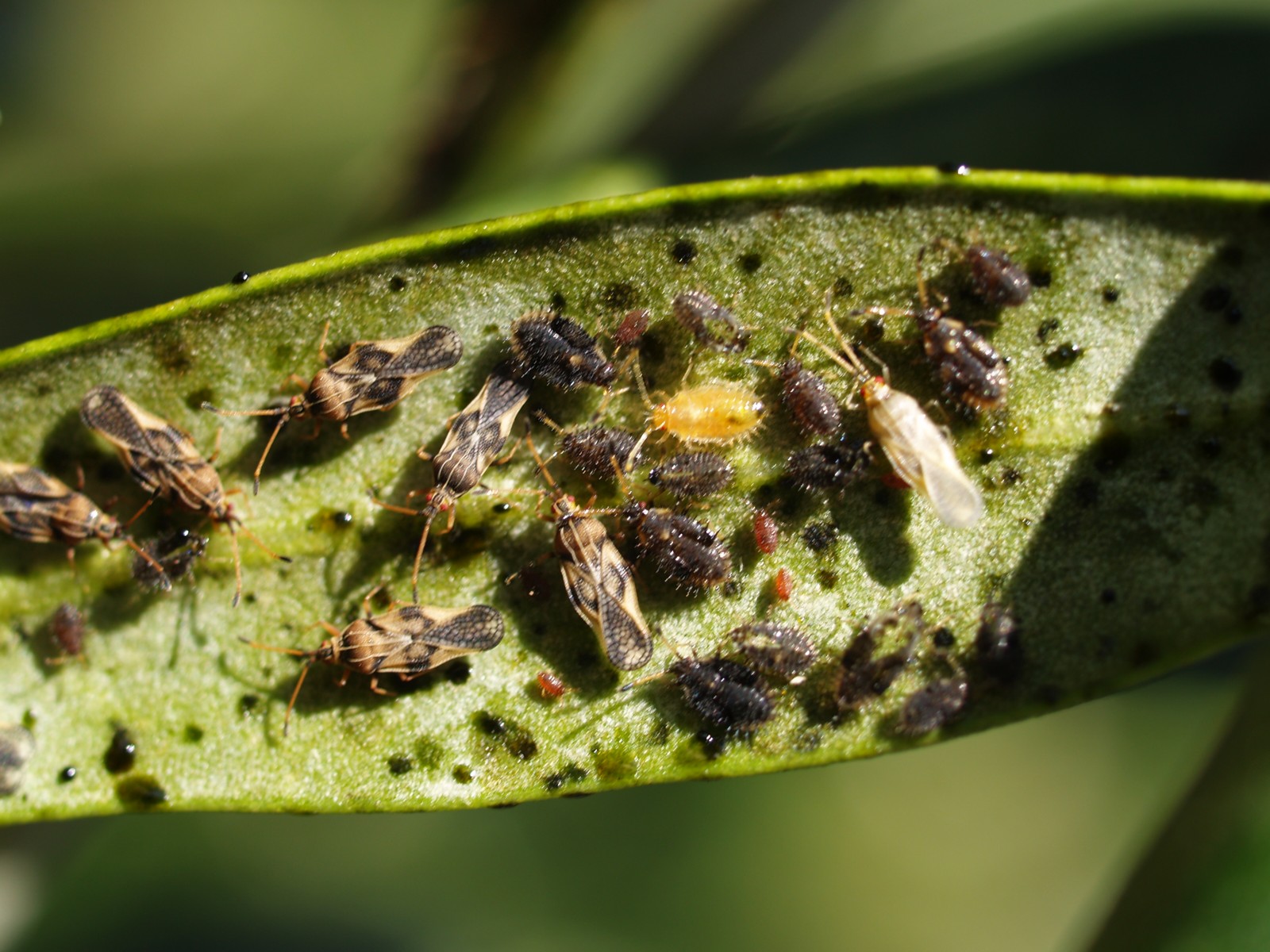 There are two types of scale insects that attack olive trees in Australia; soft scale and armoured scale.
Most soft scales often have only one or two generations per year, while most armoured scales can have several. Eggs of both types of scales are usually hidden under the mother’s cover and are not visible. Eggs hatch into tiny, usually yellow crawlers with legs. The female adult dies soon after the eggs have hatched.
Crawlers walk over the plant surface, are blown by wind to other trees, or can be inadvertently moved by people or birds.
Armoured scales settle down permanently after a day or two in the crawler stage, molt and begin to form their characteristic covers. Soft scales move around for a while longer but also eventually settle at permanent feeding sites. Sooty mould is an unsightly fungus that is often associated with scale infestation. The mould grows on the excretions (honey dew) produced by the scale insects as they feed on the tree. The fungus does not cause any direct damage to the trees but can cause a significant reduction in photosynthesis by blocking sunlight from the leaves. Sooty mould can only be removed if the insects producing the honeydew are controlled. Once the scale insects are gone the honeydew supply stops and the sooty mould will slowly dry and flake off with exposure to sunlight and rain.

Beneficial insects that are natural enemies of scale can be used to help manage scale. These include: the scale eating lady beetles. The larvae of these predacious lady beetles can be found under the female soft scales feeding on scale eggs and crawlers. Many parasitic wasps are important natural enemies of scale.
Parasite activity can be monitored by checking scale covering for the round exit holes made by emerging adult parasites and by turning armoured scale over and looking for immature parasites.
Ants deter natural enemies, and if large numbers of ants are climbing up trunks to tend scales they should be controlled. Deny ants access to plant canopies by applying a sticky material (such as Stick’em) to the base of the tree trunk.

Canopy structure and density will have a major influence on the development of scale.
Scale prefers moist, dark, environments with mild temperatures for optimal growth. Regular pruning opens the canopy and exposes scale to sunlight, higher temperatures and drier conditions. Pruning to provide open, airy trees will help discourage scale and favor the activity of beneficial insects. Open canopies will also help improve the penetration of sprays through the trees making spray applications much more efficient.

White oil and botanical oils are safer organic inputs that can be used if chemical control is required.
These work by smothering the young insects when they are at the crawler stage. Applications of these chemicals must be carefully timed to reach immature scale in the crawler stage. At later stages the scale are very resistant to treatments.
The main crawler stages for scale are in spring and summer. A second crawler stage may also be present in autumn. At least two sprays during each crawler stage are necessary because treatments do not affect the eggs. The second spray targets crawlers developing from the eggs still unhatched at the time of the first spray.
Apply white oil treatments after a sharp increase in crawler production occurs or after crawler numbers have peaked and begin to decline.

Olive lace bug is a common pest of olives. Heavy infestations can cause loss of vigor, severe defoliation and reduced fruit yield. The bugs are sap-sucking insects that feed on the underside of the causing a yellow mottling of the leaf surface which usually turns brown and eventually drops.
The olive lace bug can have numerous generations per year depending on the climate. New infestations can occur regularly throughout the growing season. Eggs that have over-wintered on the tree usually begin to hatch out in spring or late winter. Monitor the trees in early spring for evidence of insect infestation. Apply natural insecticide treatments soon after lace bug activity is first noticed. Lace bug populations can build up rapidly if left unchecked. At least two sprays are necessary 10-14 days apart to control each infestation. Keep in mind that chemical treatments do not kill the eggs. The second spray (10- 14 days after the first) targets the nymphs emerging from the eggs that were unhatched at the time of the first spray.
Low toxicity Pyrethrum products are effective in controlling olive lace bug.
Natural pyrethrum (known as pyrethrin) is extracted from the flowers of Chrysanthemum spp. and has a low mammalian toxicity. Natural Pyrethrum is an approved organic input for growers.
Good coverage is essential when using natural pyrethrums as they are contact sprays that have a very low residual life and break down quickly in sunlight.
Synthetic pyrethrum ( known as pyrethroids) mimic natural pyrethrum compounds but have the advantage that they have a longer residual life and are cheaper to produce. They are very effective in controlling lace bug. Synthetic pyrethrum’s are the active constituent in most household cans of fly spray.

Lace bug are not difficult to kill but it is essential to obtain good spray coverage when applying chemical treatments. Before spraying badly infested trees, it is recommended that severe pruning is undertaken to reduce tree height and to open the canopy.
As well as making the management of the trees much easier, pruning will improve airflow and facilitate the penetration of spray through the trees making control of pests and diseases much more efficient.
Pruning will also help rejuvenate badly damaged trees buy encouraging new shoot development.
Once the infestation is controlled, regular monitoring of the pest is required on a fortnightly basis throughout the growing season. Usually “hot spots” will occur along the edge of the grove and/or in the vicinity of prior infestations. Hot spots start with the adult lace bug infesting a few trees. If these “hot spots” are sprayed as soon as the lace bug develops then the whole grove will not need to be sprayed.

Peacock spot is a widespread fungal disease of olive trees that affects the foliage and to a lesser extent the fruit. The disease requires moist warm conditions to develop and usually becomes prevalent in autumn and spring. Small sooty blotches develop on the leaves, which in time grow into greenish-black circular spots that measure 2 to 10mm in diameter.
A faint yellow halo is often evident in the tissue around the spots. As the disease develops the leaves become yellow and fall. Most of the infected leaves will fall prematurely by the start of summer. In severely infected trees complete defoliation can occur. Peacock spot is best managed by applying a preventive copper spray in late autumn. A second application in late winter is also recommended in areas subject to warm winters and spring rainfall.
If you missed these sprays an application in spring is recommended to prevent inoculum slowly building up and causing a major disease problem down the track.
The common fungicide Copper Oxychloride is used to manage peacock spot in olive is an approved organic input.

As with other pest and diseases pruning to provide open, airy trees is an essential management practice. Open trees will discourage Peacock Spot infection and make spray applications much more efficient.
General Spray information
When both a fungicide and insecticide need to be applied at the same time, mixing the two together in the same spray tank can reduce spray operations.
The compatibility of various chemicals can be checked on the product label or by contacting the manufacturer.
It is not recommend that chemical treatments are applied to the trees during flowering as some chemicals can cause flower abscission and disrupt fertilisation and subsequent fruit set.